The Dutch population is used to creative solutions when it comes to water. Yet, even Amsterdam’s fairly modern sewage system and the ubiquitous canals and rivers would likely not be able to withstand the intense rainfall of recent years. Expanding the existing infrastructure to process ever-larger amounts of water is not viable. The ultimate solution lies in a combination of measures ranging from very small ones, such as individuals putting water tanks in gardens, to bigger ones like using permeable surfaces in public spaces.

The Layout of an Entire City

Waternet—the water company for Amsterdam and its surroundings—is in charge of monitoring the dykes, purifying wastewater, and supervising the sewage system and the supply of drinking water. In 2011, the Danish capital, Copenhagen, suffered from severe flooding due to extreme rainfall, leading to damages of €500 million (US$537 million). The leadership at Waternet saw this as a warning sign, given the similarities between the two cities. But to tackle this potential threat, it would be necessary to look at the layout of the entire city.

Waternet established a new organization—Amsterdam Rainproof—to face the challenge. In early 2014, Daniel Goedbloed was appointed program manager. “Our main challenge was to do something about the lack of awareness of the problem. Not just with ordinary citizens, but also with housing associations and the municipality, and even within Waternet, where people think in terms of compliance with existing norms and don’t feel responsible when something out of the ordinary happens,” states Goedbloed.

Amsterdam Rainproof is, in essence, a network of organizations with a core team of five to ten people. Just six months after its creation, Amsterdam was hit by severe torrential rain. “In a way, this was a blessing in disguise,” says Goedbloed. “The city council was now wide awake. This made it easier for us to see how interventions to make the city more rainproof could be integrated into organizational proceedings. Everywhere in the city where the municipality, businesses, and citizens are working to physically change the city, we urge people to take the possibility of extreme rainfall into [consideration in] the design of houses, gardens, streets, and parks. Then the extra investment can be limited,” Goedbloed explains. 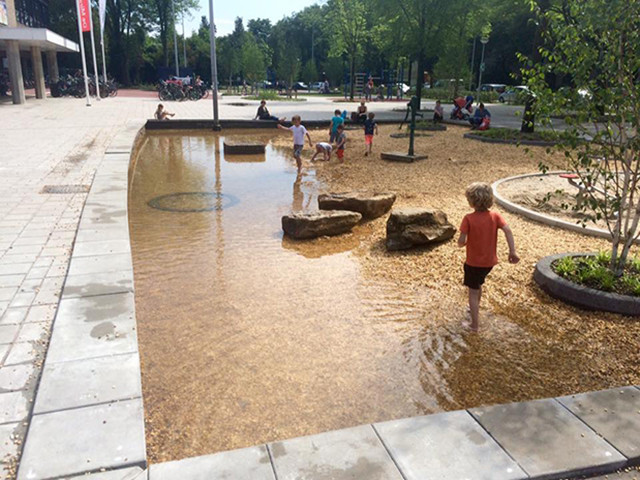 To create awareness and initiate actual change, a good analysis was needed. Amsterdam Rainproof, together with specialists in urban design and hydrology, made a map of the city that showed where water would accumulate in case of heavy rain, using 2.36 inches (60 mm) of rain per hour as a reference. The result was a list of 97 points in the city that were at risk, of which 14 needed immediate attention. This blueprint of how the water flows through the city divides the city into hydrological entities. Goedbloed says, “It helps us gain more insight into the situation, which is also useful when planning public works in the city, from maintenance of sewage systems to redesigning public spaces.”

These planned interventions by the municipality are also a good occasion to get in touch with residents. “We do presentations at local community meetings in areas where interventions are planned,” Goedbloed says. “The response we get there is good. People realize the urgency and are willing to help. We provide them with simple tools they can apply themselves.”

Intermediaries are crucial in reaching individual citizens. “When people want to build a roof terrace or a garden, they go to the garden center or hire a horticulturalist. Amsterdam Rainproof has provided these intermediaries with information on simple measures to make a garden more rainproof, like creating possibilities to store water, to better drain it, or to absorb it. This can be anything from a pond to a water tank, the use of permeable material for a terrace, or plants with high water absorption. They can advise their customers in making a rainproof choice,” says Goedbloed. 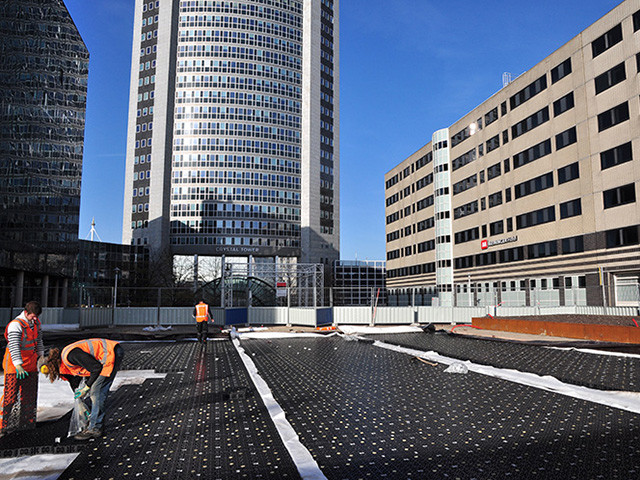 As a network organization, Amsterdam Rainproof is always looking for common interests—whether it is the horticulturalist who wants to give better advice to his or her customers and increase revenues, or the hotel owner who sees a chance to turn his or her rooftop into a nice terrace for guests. “We are constantly working on combining interests of partners with our own interests,” Goedbloed states.

In the case of public space, the municipality has a lot to gain by investing in rainproof measures. A good example is the Orly Square in front of one of the railway stations in Amsterdam. For years, this was an asphalt jungle. Now, it is a green oasis, which not only helps absorb rainwater, but also makes the place more attractive. Cafés have popped up and people actually linger there now. Measures such as these make the city more rainproof and more attractive at the same time.

Seducing Instead of Dictating

As the density of the city increases, rooftops have become the new frontier. First, they were discovered by the solar panel lobby; now, the rainproof lobby is adding to its attractiveness. One of the rainproof projects that Goedbloed finds most appealing is the “polder roofs,” an invention of a group of social entrepreneurs who call themselves De Dakdokters (“the Roof Doctors”). The polder roof consists of a layer of crates in which rainwater is stored. The crates are covered by a filter and a layer of substrate on which plants can grow. “The height of the substrate defines what kind of plants you can use and, of course, that all depends on the capacity of the roof,” explains Eva Braaksma, one of the “roof doctors.” The amount of water stored can be monitored online. The water can be gradually led into the sewage system, preventing overflow, but it is also used for irrigation of the plants. Amsterdam already has 43,055 square feet (4,000 sq m) of rainproof polder roofs, most of them realized in 2016. Green roofs are popping up everywhere in Amsterdam, some of which are turned into complete rooftop gardens and terraces, creating new attractive spaces. Braaksma adds: “Green rooftops of any kind also combine well with solar panels. The vegetation cools the rooftops, which increases the output of solar panels.”

Rainwater that has been collected on rooftops has even been turned into a local beer by a brewery called Hemelwater (“Heavenly Water”). It is exactly these kinds of stories that help the rainproof initiative. “We strongly believe in the art of seduction,” Goedbloed states. “Incentives instead of rules. That is why we are also investigating the possibility of giving owners a financial compensation for rainwater that is stored on their premises.”

In its first two years, Amsterdam Rainproof has been very successful in creating awareness and change in municipal organizations and in setting up a network of organizations willing to participate in making Amsterdam more rainproof. But it still has a long way to go. Goedbloed says: “The government organizations have set a good example, so now it is time to spread our wings. Next year, we focus on local housing associations and on the individual inhabitants of Amsterdam. To really make Amsterdam rainproof, every drop counts and everybody has to take a part of the responsibility.”

I have been living in Amsterdam for the past 2 years and I have traveled most of it by bike. Or so I…

There are also many stories about what the X's mean, but I think they got it right with the ultimate…