It’s been 5 years since Angeliki and Myrte decided start creating their dream. With 10 students in total, 5 Dutch and 5 Greeks, they started teaching Dutch and Greek at the “buurthuis” on Elandsgracht, offering knowledge and a warm friendly environment. Many of those students came back to Taalhuis after a while to continue their Dutch lessons and one of the first students of Greek is joining Taalhuis every year to its language trip to Naxos and this year Crete. 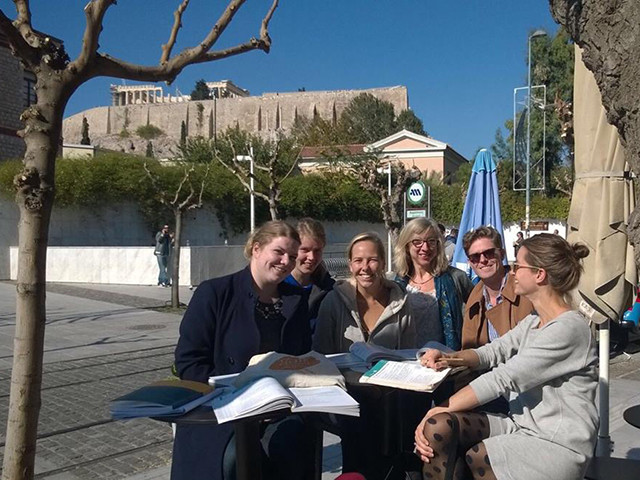 After 5 years of effort, dedication, hard work and love for lanuages, Taalhuis Amsterdam has 3 unique locations, where one can learn Dutch, Greek and other languages, but also participate to language trips, games, movie nights, museum visits, drinks, parties and many other creative activities that can help the students with their relocation to the Netherlands and to make new friends. 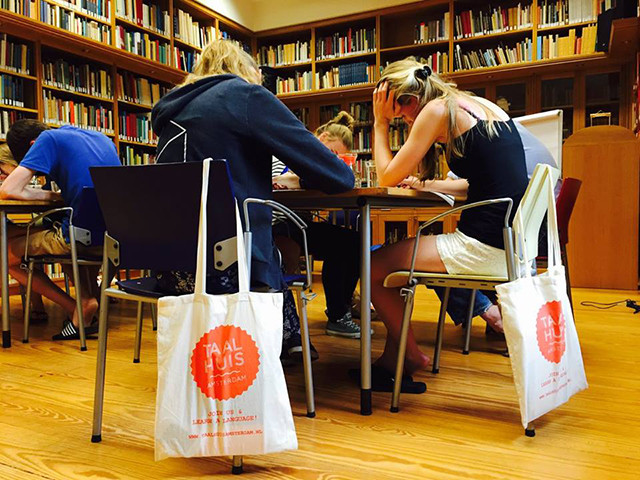 Taalhuis Amsterdam has become one of the most organized language schools, with more than 500 students. With a strong teacher’s team, Taalhuis Amsterdam offers a wide range of courses, groups and/or private, inside and outside the school. 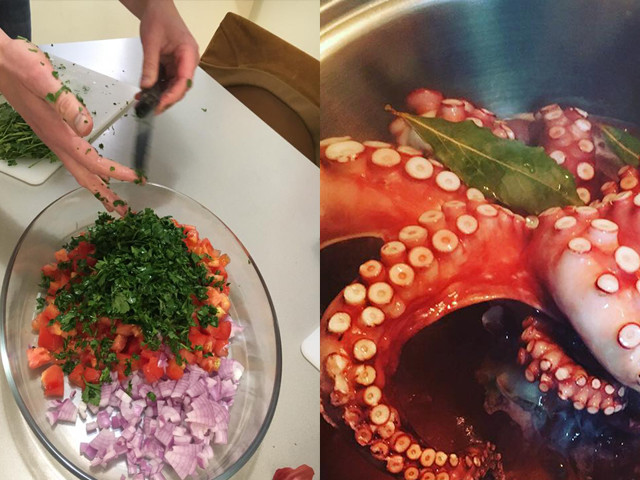 Is there a language that you would like to learn?

Choose from Dutch, Greek, Arabic, French, Italian, Spanish, Farsi, Turkish, English and Latin. Taalhuis welcomes students from all over the world, with lessons in small groups, spread throughout the week, in three locations in Amsterdam. One must be nearby you. 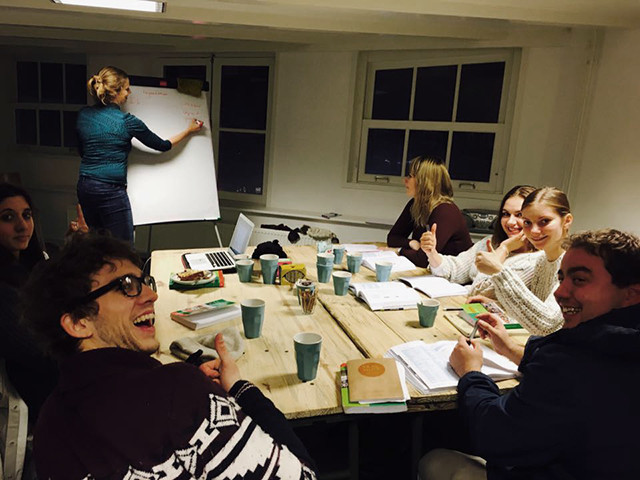 Except the language courses, Taalhuis also offers other services like: renting a space, (sworn) translations and interpretations, assistance to high school pupils with their Latin and Ancient Greek homework, private lessons to prepare students for the NT2 exam and the Greek language certification exam, always while serving excellent coffee that you also take “to go”. As from January 2018, Taalhuis will start an international choir, the lectures on “dead languages” will continue, as well as the pronunciation workshops and grammar workshops will be added to the program. 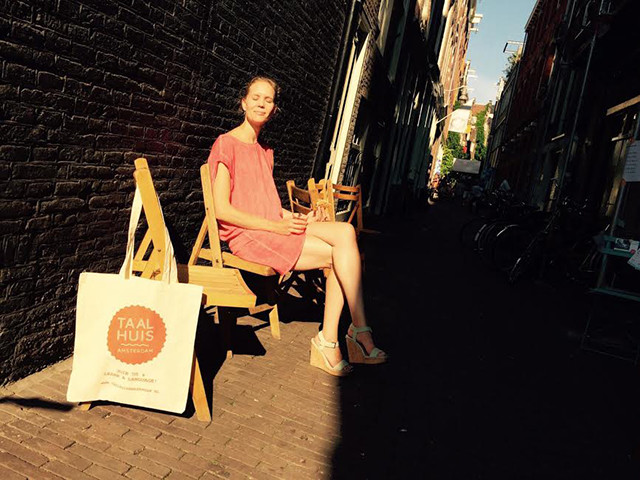 Don’t miss the very interesting visits in simple Dutch at the Amsterdam museums and the movie nights, nor the “language exchange lessons”, where the students practice the language that they are learning with native speakers. At the end of every season, students and teachers get together for drinks and seize the opportunity to get to know each other better and of course to practice their languages! 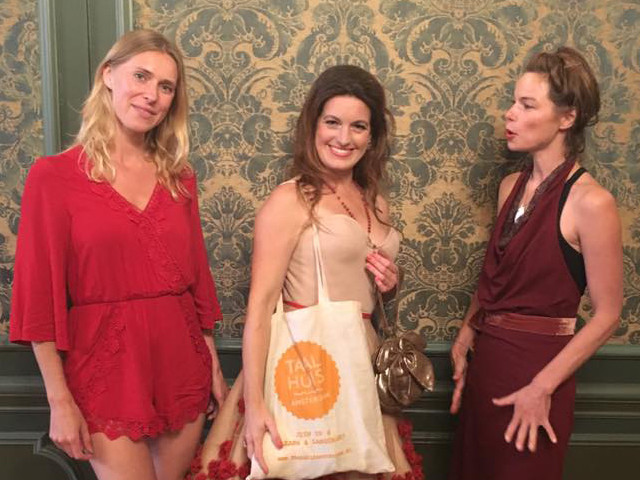 In cooperation with ASKV and with a small contribution from their students, Taalhuis Amsterdam offers free Dutch lessons and learning material to refugees.

With creativity, decisiveness and organization, Taalhuis Amsterdam will keep growing and welcoming students. Would you like to become one of them? 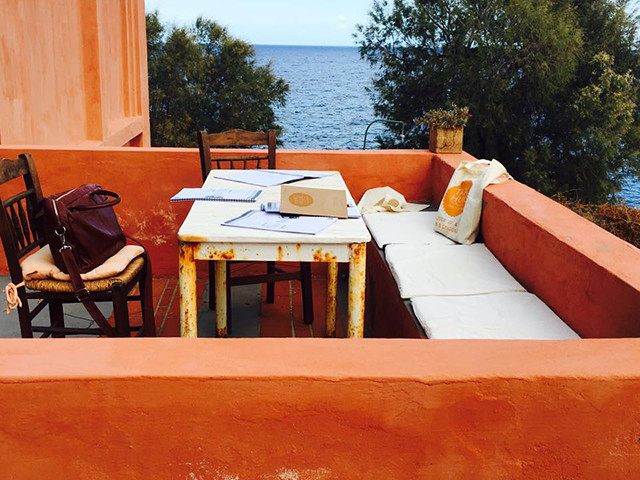 Drop-by Taalhuis Amsterdam on January 13th to meet the teachers and participate to the different creative workshops.

An all-day festival with:
Turkish coffee and delight by Melike, French dialogs with Lucie, Arabic calligraphy with Wald and Farah, Egyptian street language with Roel & friends, sing a Dutch song with Una – Dutch teacher and professional jazz singer, solve an Etruscan riddle with Diederik and dance “Beyond Syrtaki” with one of school’s first students Christos and his team.

Furthermore, you participate at the Tabouleh workshop by Taalhuis student Yahia from Lebanon (and shisha on the roof of Nieuwezijds Voorburgwal), make Italian gnocchi with Manueala and Paolo, get rid of your Dunglish with Alma, discuss Pepe Mujica with Alberto and enjoy a glass of Argentinian wine and join the very first Taalhuis pubquizz designed and hosted by Isabel and Michiel!

For more information on the events of January 13th: 5 years Taalhuis

What are you waiting for? Taalhuis is telling you:

Join us and learn a language!

Read what Taalhuis students are saying about their own experience www.taalhuisamsterdam.nl and at their official Facebook page: Taalhuis Amsterdam