First time I am following from close municipal elections in another European country and I would like to share my impressions also in relation to Greek political life. Utrecht. 19 March 2014. Reserve the date!

Let me start with a peculiarity of municipal elections. The Dutch do not vote for mayors. Mayors are appointed by the Crown, as proposed by political parties according to their electoral power. Citizens vote for councillors. In this respect, the system is similar to the UK, in cities where there is no elected mayor (Well, the UK system is a bit more complicated.)

In the forthcoming elections in Utrecht, voters can choose among 17 party lists. In this article, I am comparing the programme of Groen-Links (green-left party), which won a narrow victory in the last elections, with D66, the social liberals and main contenders for the first place, whose programme I had a look into too. I focus on these parties because they are progressive and pro-Europe and ideologically close to the Greek parties I have a sympathy for - Drassi, Liberal Alliance, Greens, Europe-Ecology and Democratic Left.

The most striking similarity of the D66 and Groen-Links programmes is that they present celebratory accounts of the beauty of Utrecht. Dutch people love their cities and wish to make them prettier. Douze (12) points to both parties! The main differences are that Groen-Links place more emphasis on the green economy and social policy, while D66 focuses on entrepreneurship and job creation, the need to cut bureaucracy and to invest in education. The focus of D66 on education at the national level reminded me of a famous speech, but I do not know whether substantial parallels exist.

Guess what! They will do a great match if they form a coalition as they have done so far (together with PvdA). And this is another striking feature of Dutch politics for a Greek, whose “home” politics are marked by confrontation even for common-sense issues. Dutch politics equals consensus; built on political agendas and not on the distribution of power only. From the Wageningen PhD Council to the local government of Utrecht, consensus is the keyword and seems to be the key for designing and implementing policies with an impact on people’s lives. 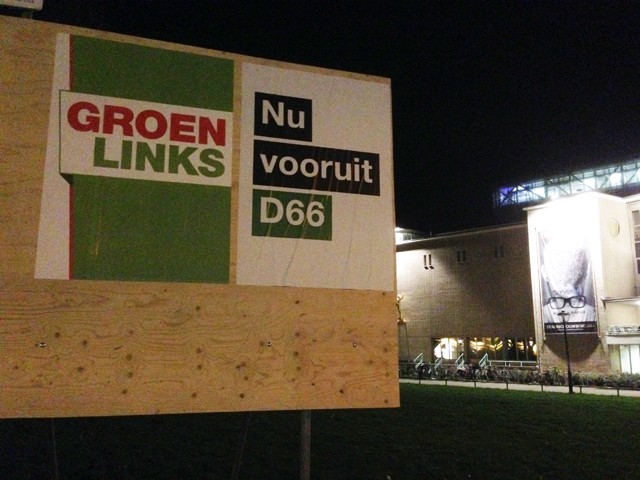 Their posters next to each other seem to suggest that they can do a good match, despite the tensions at the first debate among the list-leaders.

Another difference is that D66ers wrote their programme collectively and are so proud of having done so, that in the programme they mention all names. I happened to be at a meeting where they discussed amendments and I was struck by the democratic culture and the sense of responsibility of citizens debating their common future. The programme of Groen-Links in turn was written by a committee which acknowledges the input of working groups and members. However, I do not have first-hand experience so I cannot tell whether they followed a similar procedure.

Last similarity, unfortunate in my view, is that neither party’s website contains information in English, thus Utrechters who do not speak the Dutch language but who could participate, e.g. EU citizens, are not encouraged to. A counter-argument is that being actively involved in politics requires a deeper understanding of the local culture, thus one needs to speak the language. However, such a view fails to acknowledge the realities of many of today’s mobile professionals who stay only a few years in each country, but who could enrich political life by sharing their experience of how other societies are organised.

The EU citizens’ in the Netherlands, in particular, are almost 300.000, people, and those who live here for more than a few months have every reason to care for collective well being, from housing to public space ( people who belong to other international communities have reasons to care as well, but they are eligible to vote only after 5 years of legal residence in the Netherlands). It is high time we become more involved in politics. Local councils are facing challenges that migrants coming from the south or eastern of Europe have experienced in their countries too. Debates about prudent spending which are sometimes connected to immigration. Since the Netherlands is for many of us a land of opportunity we need to demonstrate that we are here not only to grab chances for individual prosperity but that we can be responsible citizens and contribute to collective wellbeing.

So, yes, to be informed, to participate, and to vote, if you, just like the Dutch, love Utrecht and wish to make it prettier!

P.S. By now you must have received a letter like that from the Gemeente. If you haven’t, contact them. 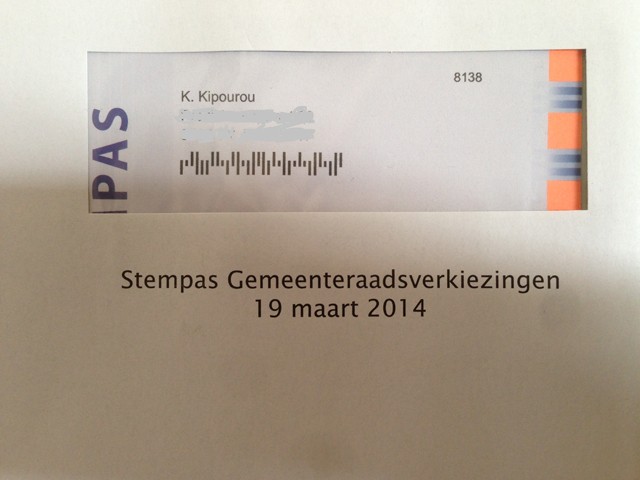 If you are Greek, you are living in the Netherlands and want to vote at the EU elections, follow these…