It has been close to 3 months that I have been looking daily online on the Internets (YES WE CALL IT INTERNETS!) in order to find a house in Amsterdam. 90 days give or take, filling up my email inbox with messages from people that don’t exist, ghost houses and rooms that you can only find in horror movies.

They had told me that, the search for a house would be hard, but this, certainly doesn’t really describe it. Finding somewhere to live under Amsterdam Noord, without a real estate agent and within a reasonable price has made wonder if it will actually ever happen. Don’t forget that in the Netherlands you are whatever your bank account says you are and because I chose to have my own business for the first 2 years I don’t “count”.

I have my business, pay my taxes, I am doing ok but I haven’t proven yet that I can make it, so I have to figure out a solution and provide legal housing for my business and my dream because no one believes that I can make it before 2 years pass, so no one will rent me their house, no matter the 2 excellent references I got from previous landlords.

So I decided to become an urban ninja and prove them wrong, finding a house, far away from the one of my dreams, in Amsterdam which I love so much, just by using my boyfriends work contract. Wishing that I would spend the lengthy interviews finding a reasonable person that will not want to trick me, scam me, register me as a “friend” and will just give me his house, with the appropriate price tag.

First stop: House in the center by a Serbian teacher

1000 euros inclusive was asked of me by the "charming" and "openminded" lady in the city center in order for her to rent her trashed apartment, ranked #3 on the worst houses I ever seen in Amsterdam. 40 square meters, a living room, a small bedroom and a kitchen with no airway to drain the smells, a floor that was full of small holes and a bathroom so old and dirty that I cannot describe here. After she had asked us for our life story and had scanned us from top to bottom she told us that we are competing with another couple for this “great catch”. In the end we didn’t get the house because my boyfriend works in a company that also does Adult Entertainment stuff as a designer and a developer so he must watch porn all day long, what don’t you understand?

Second stop: Central house, in and out

After countless emails by trolls and scams, we found a house exactly how I wanted it. 850 inclusive I was told by the gentleman that had a phonetics school and studio at his home garden that he would rent and share with me.

I google searched his email to see if he indeed existed and was not a scam and I found a couple of conversations on adult forums, posting that he would be alone on the weekend and that he was looking for a couple of working girls to have a “weekend sex marathon”. Knowing that this person will be staying above me and putting aside that these sort of parties might be still happening, I still went to check out the house and see if it was indeed as it looked on the photos. The kitchen turned out to be outside of the house, the owner could walk in at any time and the spaces were horrible, plus there was no chance of a legal contract, something I learned there. So I said a huge no and left disappointed.

The third and last house that I thought would be ideal to stay in with the money that we can spend, was in one of the most beautiful spots in Amsterdam. The photos we saw were amazing, of course, we later on found out that the landlords brother was a graphic designer, so we realized the difference with reality in a heartbeat. The house was very small, perhaps ideal for a student or a bachelor at most, but I could compromise into giving 1150 per month for this small hole, next to the metro station and the train station. Off course since I am writing this post, you do realize that I didn’t rent this one as well, because it was an illegal rental, even though he tried to sell it to me as perfectly legal, while haggling about everything, since this landlord was Turkish and a salesman. 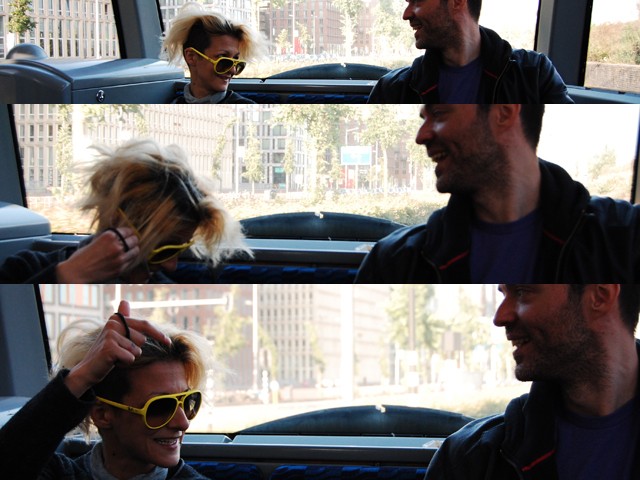 Three months ago I told that I would dye my hair the day I would sign the contract to my new house. I told myself that I would go all the way with this.

Never bother yourselves with any house that is owned by a british person and who wants you to send him money via post or western union.

As soon as the email you back, immediately ask for a skype or phone. If the ask you to install some third party chat application like Tango because the are from the USA, then its probably a scam.

Situations that resemble the, “I prepaid my house a year ago and now I am getting moved”, is also most likely a scam.

I am in charge of my mother’s and father’s house and they told me that if you don’t make a deposit then you are not reliable, well, its also probably a scam.

What is the right procedure

Contact the landlord and get an appointment after you have exchanged information and he is willing to accept you as his tenant.

You give him your paperwork but always ask for his ID as well.

The contract must be in English if you don’t speak Dutch. The landlord actually has to do that for you. If he tells you that he must go through a real estate agent for that then that means that he is probably trying to make some more money on you, unless the house is under some special leasing agreement. There are actually quite many cheap and ready contracts, or even the landlord can compose one and file it with the Tax office.

After you have checked out that the owner and landlord of the house is really who he claims to be, the day you are moving in, you pay him the money for the first months rent and the deposit you have agreed via your Bank account, he gives you receipts for all the money spent and you sign the contract.

Never go alone to view a house, bring along a friend, just to be safe about your house choice but also to have a witness of some sort for all the ridiculous houses you are about to see.

Good luck to all those who are in the middle of their search, I’ll return with an extra post about house searching, since I don’t see me finding a house in the near future.

VICE News visited Amsterdam to see what effects the new restrictions are having. After speaking to coffeeshop…

Isn't magical to search for a house in Amsterdam. You never know in what magical neighborhood you will…