Greece and the Netherlands are two countries with not so many things in common. You can sort of figure that out as soon as you step foot out of the airport and try to smoke your first cigarette as an expat.

It is that moment, that you are standing outside of Schiphol, and the cold, almost grainy and coming from all directions, Dutch wind hits you, that you are realizing how superb it would be if you had your zippo lighter with you, you know, the one you lost at some beach in Halkidiki last year. You also realize that you just landed in a country with no seasons, no frappe on the beach and no beer at the White Tower, but really, is this what you came expecting to find here? A second Greece?

And if for some, the image of migrating is the one in front of the train, the ship (or since its 2013), the airport gate, packed with tablets, cameras and laptops on your back (since you are flying with the cheapest airline everrrrrr) and you mother crying on the background, well that was not the case for me. I refused to see it that way.

At first I saw it as an adventure in a country I had never set foot in but had heard so many surreal stories about it, filled with a thirst to live those stories on my own turn and to broaden my way of thinking.

How are these Dutch people anyways? Are they like the Germans? Will I get fined 200 euros if I throw a stick of gum on the floor? Do they bike even with snow? Why aren't they cold? How can they live with all these different people from different countries and not have so many issues? How do they see me as a Greek that just moved here?

I came packed with a thousand questions spinning in my mind and found many that hastily tried to help me and inform me. For 3 months i found myself being almost a regular at Amsterdam's and other local Gemeentes, trying to sort things out, learn what is up, guess some Dutch words, move like a slippery eel and manage to get a job - a house - BSN at the same time while still not speaking a word of Dutch.

I was a Greek in the Netherlands in a time when Greece was essentially without any form of Government and everybody was asking me at any exchange if my country was still in the European Union to see if they would rent me a house or if they would work with me. This is a surreal story and I always wanted to live one, why am I complaining? I wanted to attract attention? Piece of cake! By saying the word “Griek” everybody’s eyes were fixing on me! I was I guess, one of the first, of the big wave of Greek expats and I felt like a tropical bird that was taken from Halkidiki.

Can I touch you, i haven’t seen a Greek before. Only my friend Nick but he was born here so he doesn't count...

...told me a Dutch lady I met at the gym. But really, is it her fault that she was looking at me with so much curiosity, wondering how from Ithaka and Mykonos I ended up in Zaandam?

And its true, I was heading for Mykonos but the "pilot" must have taken a wrong turn somewhere and I ended up a migrant in the land of humidity, trying to prove that I am not an elephant and at the same time restart my life.

I found a lot of cold in front of that entrance, on that first cigarette, but as I was moving further along I started to get hit by a nice warmth. And the more I move along the more warmth I find and if I ever manage to learn and speak this really weird language it will be even warmer for me. And even if I wanted to, or am afraid of, I will never become Dutch. Because I know what it is like to take my car and in 30 minutes be in front of the sea, with friends, the dog and frappe on hand, still frozen, with my mother on the phone asking me if I ate today, and apparently I will never forget that.

Welcome to the Netherlands, now get over the shock.

An interview with Marios Selevistas regarding the life of LGBT expats in the Netherlands. We hope the… 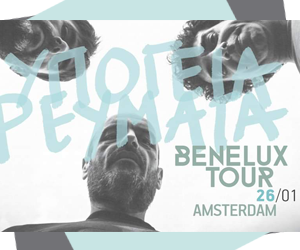