Byron Theodoropoulos and Michael Mathioudakis, two of the best stand up comedians of their generation, will be visiting Amsterdam this May.

After consecutive sold out shows in Greece, it's time for them to spread their wings and embark on their first European tour.

The show will be a combination of brand new material by Byron Theodoropoulos, alongside the best bits from Michael Mathioudakis’ new monologue entitled, "All Wrong”.

Read the interview they gave to iamgreek.nl and get to know them better! 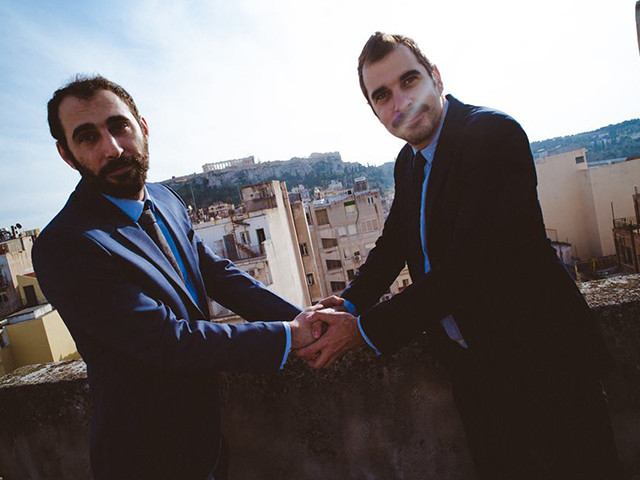 When did You realize you were funny and since when did you start doing stand-up comedy as a real job?

Μ.Μ. In the 2nd grade, at the end of an essay I wrote the phrase “haha” and when my teacher read it she laughed. I told her “M’am I’m funny” and she replied “I know”. That was it. From then on I decided to be funny. And I always tried to be funny. Sometimes I was and sometimes I obviously wasn’t. In terms of stand up comedy, I decided to take it up about 4 years ago and I very quickly discovered that being funny amongst your friend in no way means you’re funny on stage. It’s a totally different thing.

ΒΘ Ever since I was a kid I was into jokes and I used humour as a means of communication with my family and friends, but I still don’t believe that I am funny by nature. Stand up comedy is about much more than just being funny. It’s more about the emotional bond you build with the audience, how many “miles” you’ve travelled on stage and a lot to do with writing and even more to do with deleting.

Which was the the best and the worst audience you've had so far?

There have been some amazing nights at Maieutirio in Thessaloniki when you come off stage and think you’re 3 times funnier than you really are and a few days later you’re on stage in Argyroupoli wondering where you went wrong in your life.

With what topics you will make us laugh;

You haven’t been to Holland before. Do you think the audience will be a surprise for you?

Our friend and colleague Lambros Fisfis has repeatedly told us that the Dutch are one of the hardest audiences to please. Let’s hope that the Greeks in the Netherlands are more like the audience in Athens or Volos and less like the one in Rotterdam or Utrecht.

When the audience does not laugh with your jokes, what do you do?

We don’t burst into tears and we don’t get off the stage. Calmly and collectively we deliver the rest of our set believing that a different subject or a different bit with seem funnier. 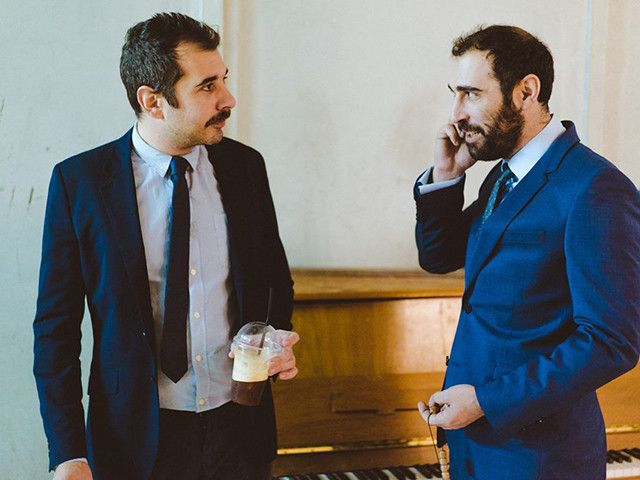 How come you two go together?

Mutual appreciation of each other’s work, a nice and easy working partnetship on equal terms and good company is a package that nobody can deny.

Who are your favorite stand up comedians?

How much the reaction of the audience in Greece has changed regarding stand up comedy, the last 10 years?

We can only speak about the last 5 years that we’ve been involved in stand up. Stand up comedy in Greece is undergoing a growth and an acceptance by the audience in recent years. But let’s not get ahead of ourselves. We’re a few years and hundreds of shows away from it becoming a mainstream entertainment choice. From 2011 till 2014 the majority of shows were attended by people who had a limited exposure to the genre and no idea of the Greek stand up scene. The last couple of years though, the audience will turn up knowing what they’re going to see.

The reasons for this are many. Most comedians are doing a good job, without having to resort to swearing or insulting their audience. The other reason is that a lot of people have had a taste of how stand up works, either by studying abroad or through YouTube. Generally, humour is one of the staples of social media whether it is one-liners on Twitter or memes or even just Facebook rants.

What was the secret that brought you closer to success?

Overall, the past few years we’ve dedicated ourselves to stand up, we’ve organised our workload correctly, we’ve played and continue to play anywhere they’ll have us, we’ve taken some calculated risks, we believe in our material and we’ve been healthy and lucky. It’s given us more happiness than success.

What make you laugh?

ΒΘ A lot of things. Amongst others: my friends, my brother-in-law, the film “Let the women wait”, Fouseki’s prank calls, the whole of “The Wire”, the “How to...” books of George Mikes, Arkas, Apostolis, the faces of Walter Matthau/Alec Guinness/ Ugo Tognazzi and that video with the cockerell by Dionysis Makris. These things just slay me evert time.

Μ.Μ. I laugh easy and with a lot of things but there’s two thing that rip me apart:
a) Watching angry people losing it and
b) Watching shows or movies that are so bad all you can do is laugh. 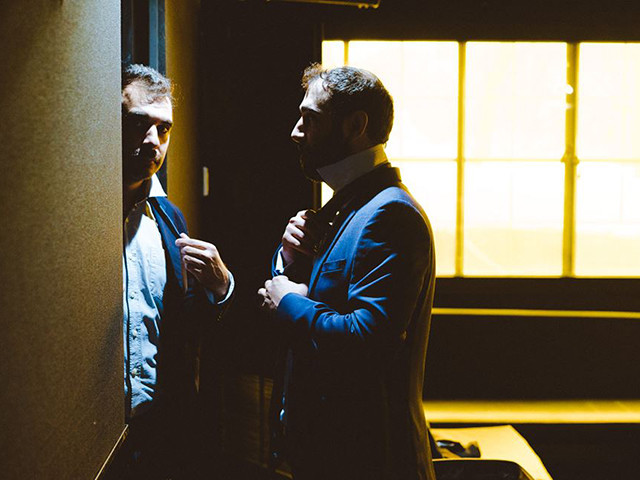 Michael Mathioudakis and Byron Theodoropoulos live in Amsterdam!: Join the event on Facebook 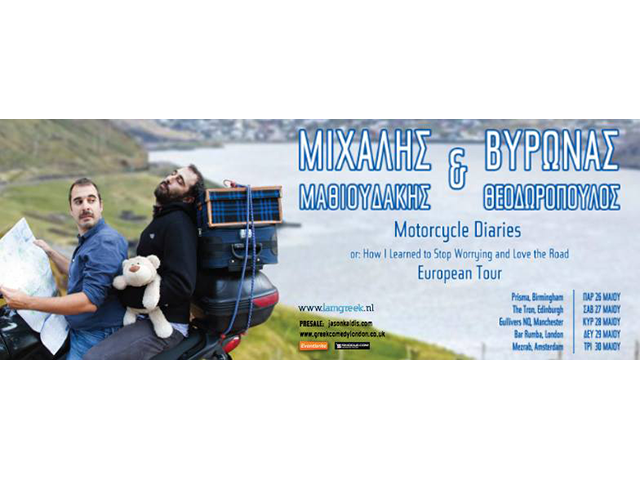 Nikos Koulousios is the voice and the man behind Hellas Pindakass, the Greek radio show on Amsterdams…

I have been living in Amsterdam for the past 2 years and I have traveled most of it by bike. Or so I…