Starting his career in Amsterdam in 2007, he has managed successfully to entertain dutch, greek and international audiences at Comedy Cafe and on various performances. Moving back to Greece four years later, he has worked as a scriptwriter in TV series Genia ton 592 Euros, he has created the series Kapse to senario and has made guest appearances in the TV series Comedy Room and Big Talk of Netwix while we can to watch him as a presenter of Quizdom the Show in Alpha channel.

Cool, with great sense of humor, he promises to offer you an evening full of laughs at this one and only show on Amsterdam.

Who is Lambros and how did you decide to do stand up comedy;

Who is Lambros? I feel like being in an interview for a job. I hope the next questions are not “Where do you see yourself in 5 years” and “If you were an animal what animal would you be”. So le’s see, Lambros is a calm guy that doesn’t speak much and observes the world in order to be able to go on stage and transform into a guy with too much energy, that talks a lot and narrates the things he has observed. With stand up comedy my love started when i saw a videotape (yes videotape if someone is born after 1998 go google it) of Eddie Merphy. I always wanted to do comedy and make people laugh but with the help of this video tape I discovered how. 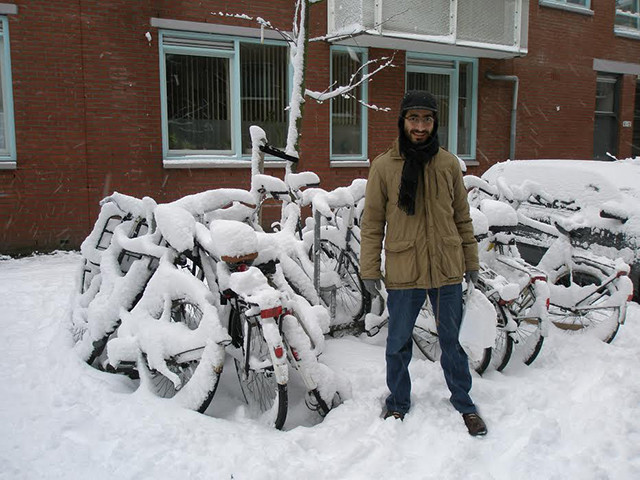 At 2007 you came to the Netherlands and stayed for four years. Why did you decide to leave the country?

It was a combination of things. The most important was that I had reached in a professional level that I couldn’t go higher in Holland. I was a member of Comedy Cafe, I was performing in theaters all over Holland and doing show in festivals. If I wanted to go further I would have to learn dutch well enough to be able to perform comedy. Which as many people that live there know it is something that can take anything between 5 and 20 years. So I went back to Greece which welcomed me in the best possible way with a crisis that still goes on. 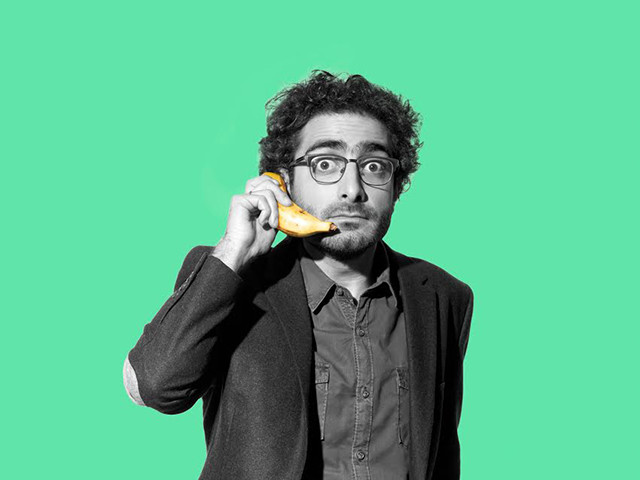 How the dutch audience react in a stand up comedy show; What are the differences from the greek and the international audience?

The Dutch audience for me was my first. The one I lost my virginity. It is as most comedians will say one of the toughest in the world. If they like you they will laugh. If they don’t they will stare at you until you cry. But this was the audience that made me toughen up and made me a better comedian. It has a lot of differences with the international or Greek audience. For sure the Greeks laugh more and louder. When we laugh our whole body gets activated. You laugh and hit your leg or someone next to you at the same time. In the Netherlands one time an audience member told me “you were great, we were smiling the whole time. The key word here is “smiling” because what we comedians want is not the smile but the laugh which actually makes some sound. On the other hand though the Dutch audience is totally open to every kind of joke. There is no taboo issues. 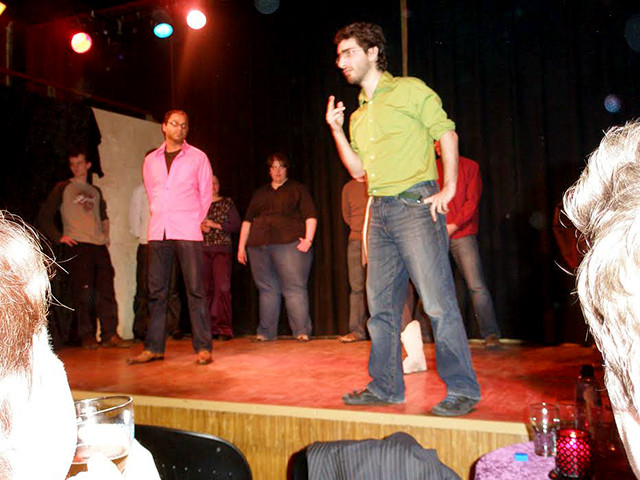 What kind of humor do Greeks have?

I have done a lot of shows in Greece and in completely different audiences. Through these show you understand that we have all kinds of tastes in humor. Definitely though now with the crisis what you notice is that Greeks laugh easier. They want to laugh so they are not going to think about it too much.

When you were living in Amsterdam you have worked as a tour guide on boats in Amsterdam and as a translator in gay dating site. Could you share with us your experience and also could you tell us some other odd jobs you had?

The second best job I ever had was a tour guide with a boat in Amsterdam. Being with a boat in the canals of Amsterdam is one of the nicest experiences one can have in this city. I was doing tours through the St Nicolas Boat Club with old Amsterdam Boats of 11 meters that fit 15 people. It was maybe the best way to see the city. In the gay dating website I worked as a translator and translated the whole website for the greek audience. An interesting experience for sure. Other jobs I had while in Amsterdam was an assistant chef in Greenpeace, translator for booking.com, producer at Endemol. 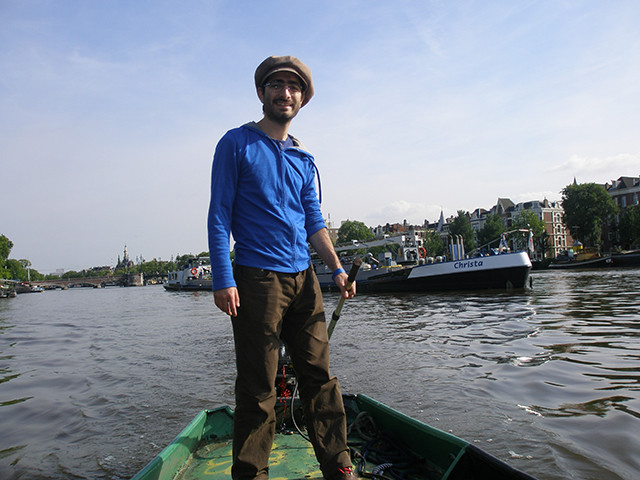 You love Greece fanatically, but your wife is from Portugal and you travel quite often. Do you believe that we should "get" Greece in medium or small doses, so we can keep loving it;

I wouldn’t say I love Greece fanatically. With Greece I have a love-hate relationship. Greece is best enjoyed in small doses. It is a country “summer house”. Live somewhere else and go for a few months there in the summer to have your vacations. 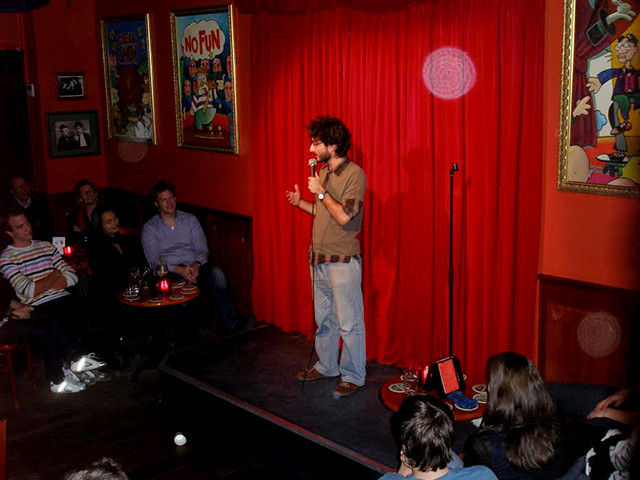 You worked as a scriptwriter in TV series Genia ton 592 Euro, you have created the series Kapse to Senario and have made guest appearances on TV series Comedy Room and Big Talk of Netwix while we can watch you as presenter of Quizdom The Show in Alpha channel. What made you love and work on Television?

Tv offers you some possibilities that you only find there. It is this thing they call dream big. But I started working in tv during the years of the crisis so the dream big was more of a dream big but then forget the dream you had and dream cheap. Nevertheless it is a great experience and a work that relies on team effort. In contrast with stand up comedy where you are alone doing everything in tv you might work with 40 people in a project. 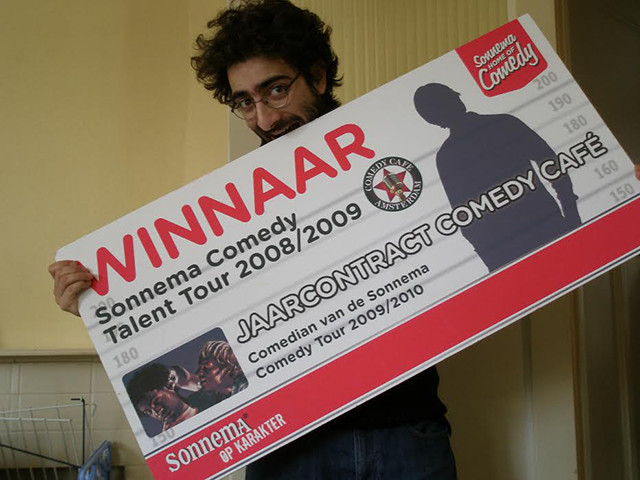 What are your favorite topics to discuss at your shows and what do you definitely leave aside?

Regardless of where I am I deal with the small details of everyday life. These topics are global. The things that we all do and no one talks about. My show is a satyre of day to day life. From the flights with low cost to the vaccum cleaners and from the meal in a taverna to the visit of a beach I try to find the weird in the everyday things. The topics I don’t talk about are the sexual and the political.

Which are some of your favorite comedians today?

Ι like watching everything. Some of the ones that really entertain me are Jerry Seinfeld, Louis Ck, Demetri Martin and Chris Rock. 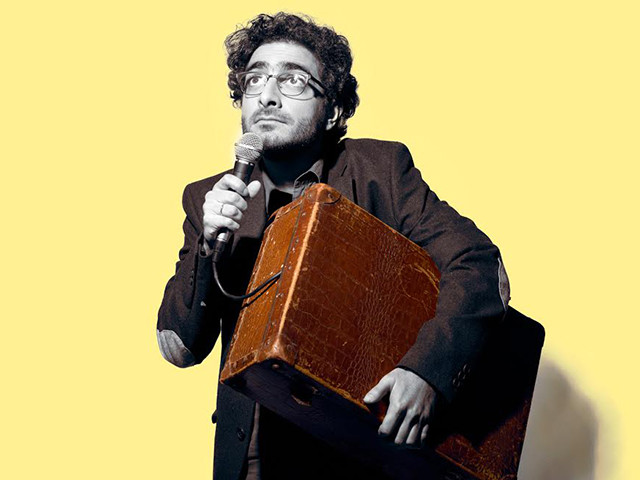 Is there censorship in comedy in 2016 in Greece?

What are your future plans?

On the 5th of December I will have a show in Amsterdam Comedy Café in Greek for every Greek expat that wants to spend a night laughing. It is a very important show for me because this comedy club is where I started my career.

In Greece I begin my shows on the 1st of January in the theater Acropol.