Soula is a dramatist, storyteller, actress, presenter and comedian. In 2005 she was graduated from the Theaterkade.

In the summer of 2013 she was in the Parade Presentation The Pensionados of PETIT CIRCUIT with Peer Mascini and Bert Walthaus.

At the moment she plays her first full-length theatrical performance "Who are you when no one is looking" in different locations. Besides that she performs in a children's play at primary schools. 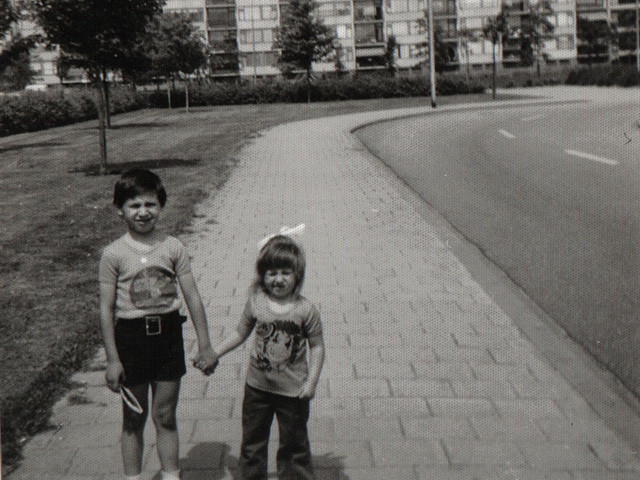 "Who are you when no one is looking"


You may have seen her on tv, as a presenter of the program Gonzo (NTR) and as a comedian in the talkshow De Halve Maan (NTR), as a comedian and MC.

She is a member of the Utrecht collective COMEDY HOUSE, which include weekly shows in the Kargadoor and monthly comedy shows at Tivoli Vredenburg and is responsible for the Utrecht International Comedy Festival. Don’t miss her as a storyteller in Mezrab in Amsterdam!

Follow Soula Notos at her adventures and you will not regret it!

Who is Soula Notos?

I'm a second-generation Greek woman born and raised in the Netherlands. I work as a comedian, actress, host, theatermaker and storyteller. I'm a member of the Utrecht comedy collective het Comedyhuis.

What was it about comedy that made you think, “This is where I belong”?

I think that about theater. I think of myself first of all as a performer, a theatermaker. That's what I studied as well. Comedy I kind of rolled in after my drama studies and is one of the various things I do. I've always liked to tell stories to my cousins and friends and to make them laugh. Trying to connect to people and move them is what drives me the most. There's nothing more beautiful than to be in a room with people who are all laughing at the same time or listening to you with their full attention. The feeling that we are all walking around in the same story at that moment is amazing. I love language, art, politics, psychology, history... I want to understand what drives people to do what they do. I try to translate that into theater, comedy, a column or in the way I approach an event I host.

What else do you do when you're not doing stand up comedy?

Working on my solo play or make performances for different occasions. I host various meetings and festivals, I act in a children's play on primary schools, I work as a training actress, I regularly give workshops (theater, comedy, Greek dance), I tell stories at Mezrab, and I occasionally write a (spoken) column. And anything else I or a client can come up with to do. Like improvise with an improvisation band in jazz centre BIM-huis. That's one of the coolest things I've ever done. Especially being a non-singer. If I'm not working I like to hang out with my friends, go for dinner, go to the theater and concerts, read or sit on a terrace, watch people and let time disappear.

How do you feel being Greek. Do you visit Greece?

I feel very Greek. I speak Greek and my temperament is quite Greek haha. So many Dutch colleagues and friends have misunderstood me.

I like to meet up with friends in the here and now and not make appointments to see them in 3 weeks (although I do love my agenda). That's why I love the days in Greece more, they seem to be longer. Here the day seems to end at 18.00 o'clock, especially during weekdays. People just disappear in their houses and their nuclear family life and fall asleep in front of the tv at 21.00 o'clock.

I listen to Greek music everyday and go to Greek concerts regularly. It's so great that all these great artists are coming to the Netherlands to perform! The music is ingrained in my cells, just like all the facial expressions and accompanying sounds and gestures a Greek makes when he's talking. What else can I say: food is the most important thing in my life, then food and of course food together with friends and family. I also try to keep up a bit with the political and social state in Greece and I retell Greek myths at Mezrab. Great stories which are still relevant today. I am also formed by Greek ideas on politeness, filoxenia, filotimia, hygiene, and respect for the elderly.

But of course I'm not like a Greek who grew up in Greece. I was formed by the Dutch educational system, I live and know by heart the Dutch political and social reality. I am not living the difficult economical times in Greece or see the refugees arriving on the islands who are trying to get a better future. And darn I don't live the sunny days. That's for sure.

I visit Greece every year, but would love to go there more often, to perform for example. 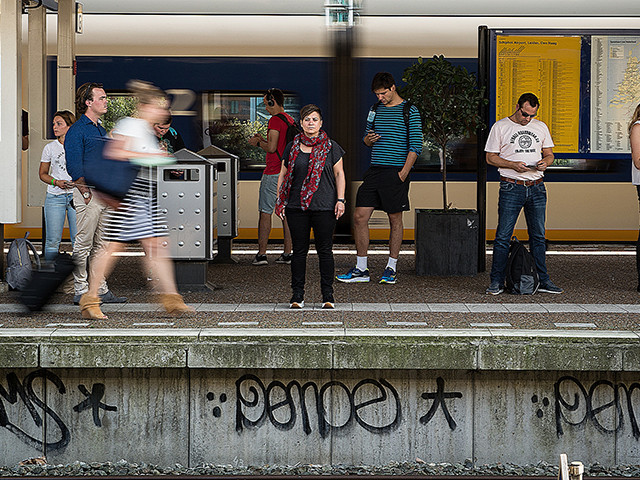 In which languages are you performing? Have you ever performed in front of a Greek audience?

Mostly in Dutch and English. And even one time in German. I also performed one time in Greek in front of 300 Greeks in Utrecht at a benefit for the Greek school. It was awesome. Finally an audience that had the same experiences in Holland.

What are the secrets for telling jokes every day in order to get the biggest laughs?

Being in the moment. Making contact with the audience. And really hearing what you are saying and fully acting it out. Really being there basically and standing fully behind what you say. With confidence and energy.

What happens if they don’t laugh?

Well, that sucks. Haha. Then you either say something about that or you carry on with your story. That's in case they don't laugh about one particular joke. If they don't laugh at all during your show... well that's really awful. Then I put even more energy into my performance and I try to make more contact with the audience. If that doesn't work either, so be it. Forget about it as soon as possible, even though that is hard.

Is is hard to be a woman in the world of comedy?

It was harder when I first started out, but there are more women around nowadays and that really makes a lot of difference. For me at least and also for the shows. But it still is a different scene than the storytelling scene for example. It's more macho, more focused on scoring. 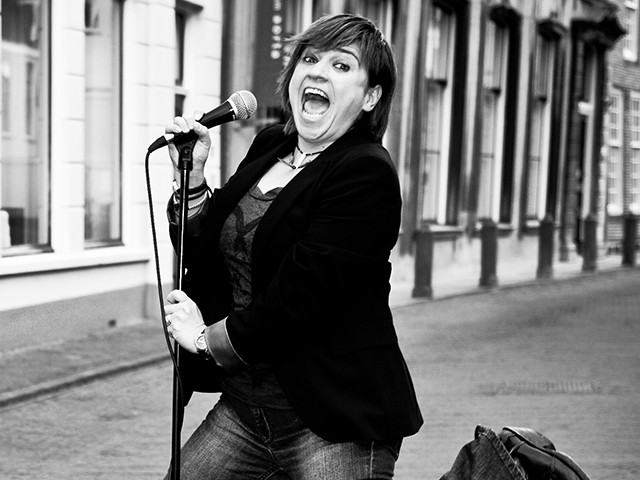 In which countries you have performed and how different is the dutch audience from the Greek or the expat audience?

I really love the expat audiences. They are more outgoing and giving than any other audience. They are really there to have a good time. I've experienced that in all the different countries I performed in. It's like a UN-convention. Nobody wants to hurt the other person so there's a very positive vibe in the room. And the majority is not in their home country so they want to laugh about where they are and each other's stereotypes. Within humor we find a common ground.

It's very cathartic. Also for me. To perform in English in front of an audience reflects my position as a bicultural person the best: I can make fun of the Dutch and the Greek from the same distance. It's very refreshing for me.

Dutch audiences can be more inward and more waiting like “ok, entertain me” and less willing to give something to do it together.

The Greek audiences; well I would love to find that out! 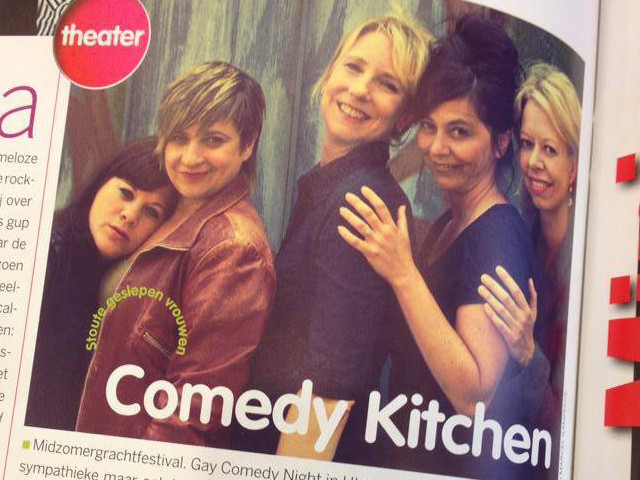 Who would you say are your influences in the comedy world?

I like comedy in which you get to know the person on stage. Also comedy that zooms into ordinary life situations so the human condition is put under a magnifying glass so you can see how weird we all are. And at the same time that's what connects us.

Where we can see you and what are the plans for the future?

29th of October in Theater Oostblok, Amsterdam (my whole solo show in English! as part of the International Storytelling Festival Amsterdam) – storytelling.

15th of November in De Nieuwe Regentes, The Hague (a part of my solo show in Dutch) – comedy/storytelling.

25th of November in De Kargadoor, Utrecht (in English) – comedy.

Plans for the future: tour with my solo play, perform abroad more often, perform in Greece. Find everlasting love (well, for at least 5 years) and the perfect moussaka.

Byron Theodoropoulos and Michael Mathioudakis, two of the best Stand Up comedians of the new generation,…