One of the most talented classical guitarists of his generation, an internationally recognized Greek artist, a “sensational, marvelous performer” according to Sir Richard Rodney Bennett who lives in Den Hague for the last few years & tours around Europe.

We are talking about Yiannis Giagourtas, with who we met after his successful performance at Regentenkamer in Den Hague to talk about his path, his success, his vision & his greatest loves.

We have read that you are one of the most gifted performers of your generation. How did it all start?

Thank you for your kind words. I was born in Alexandroupolis and I started playing the guitar since I was 8, when my parents enrolled me to the municipal conservatorium at the class of the classic guitarist and composer, Dimitris Svintridis. To be honest, the initial idea was that, regardless my progress, I would always have an instrument with me to accompany me and my friends to our parties! And that’s how it all started. I remember that no matter if I was feeling happy or sad, I would always turn to my guitar. Very soon I realized that my biggest dream was to manage to get freed from the technical barrier, so as to be able to express all of my feelings through the guitar. I’d like to point out here that nobody from my family ever pushed me nor had they any kind of personal ambition; that is the reason why my relation with the guitar evolved totally naturally.

Later on, and parallel to my studies on Accounting & Finance at the University of Macedonia in Thessaloniki, I continued my studies on the guitar with Evangelos Assimakopoulos at the municipal conservatorium of Thessaloniki. The influence he had on me was so great that only during the first year of my studies I had already decided to follow a professional path on classic guitar. 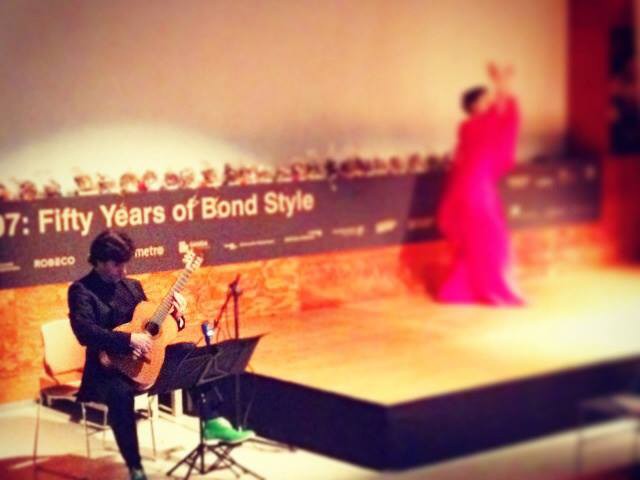 How did you manage to get from Alexandroupolis to Den Hague?

I am ambitious, I followed my instincts and I trusted people in the field who I met during my many stopovers. Once I graduated from the University, I moved to Athens where I received the Soloist Diploma (under the tutelage of E. Asimakopoulos) at the Athenaeum conservatorium with the highest honors, unanimously granted with the 1st Award and the Conservatory’s Gold Medal for my outstanding performance. Later on, and after completing my military service, I had the opportunity to become a student of Oscar Ghiglia for three years in Athens, as well as at his class in the summer Academy Chigiana in Siena, Italy with a scholarship. I moved to Dublin in 2009, where I completed my master in Performance with First Class Honors at DIT College of Music and Drama under the tutelage of John Feeley. On 2010, I moved to the Netherlands and on 2011 I started another master in Guitar at the Royal Conservatorium of Den Haag under the tutelage of Ζoran Dukic. I completed it on 2013, achieving the highest honors between the alumni of my academic school year. I would like to note that whatever I have achieved so far I owe it to the support of my parents, to the knowledge that my teachers conveyed to me, to the experience that I gained through numerous collaborations and of course to personal hard work.

Which accomplishment of yours do you consider as your greatest success until now?

My greatest achievement so far, for which I am truly proud and happy, was the premiere of the concerto for guitar and string quartet written especially for me by the President of the Greek composers and Professor of the University of Boston, Theodore Antoniou; a pioneer project, difficult in terms of technical characteristics and interpretation and which I consider a benchmark for the guitar repertoire. The world premiere was held with me as a soloist at the chamber music festival organized by the Royal Conservatory of the Hague in 2013. 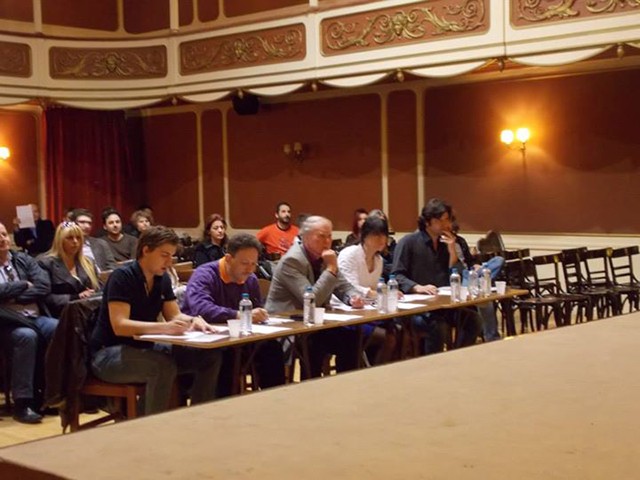 How did you come to decide to live in the Netherlands?

The Netherlands is a very well organized country, it has a solid music industry and the audience is open in terms of accepting new artists and innovative ideas. It is a country that its energy and atmosphere allow me to develop not only artistically but also professionally, a fact that I felt from the first time I arrived here. 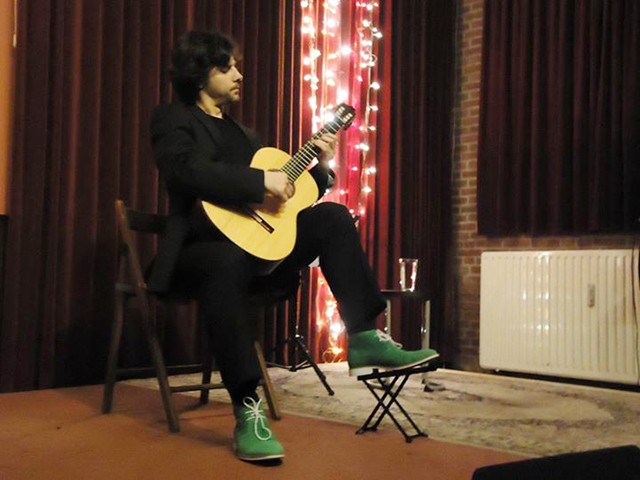 At your recent performance in Regentenkamer Den Hague we saw the audience giving you standing ovation. How does the audience reacts with you here in general? Have you ever faced any difficulties so far, and if so, what kind?

My concert at Regentenkamer was indeed a very beautiful concert and that of course is also due to all of the people who worked for it; the organizers, my manager Sofia Spinoula, Rogier Pak who was responsible for my communications, as well as my friends and supporters. It was a very warm atmosphere, which inspired me in return to give the best of myself! The audience here loves me, respects me and I gain more and more fans every day. In regard to my concerts, I have never encountered any difficulties, since most of the organizers recognized my value from the very beginning and I was given the right opportunities! 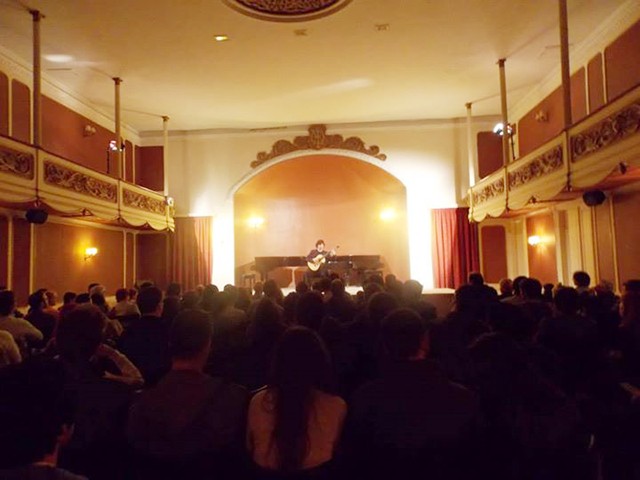 Classical music is in fact a music genre which has a particular audience. Do you believe that there are ways to bring the classical guitar closer to the mainstream audience?

That lays on the way each artist deals with it. Personally, I am direct and authentic towards my audience. These are basic elements of my character. Thereafter, it is the repertoire. For the repertoire that I choose I want it to be always in balance, so as to satisfy the more specialized audience, at the same time to respect the people who come to a classical music concert and in particular to a classical guitar concert for the first time and of course to satisfy myself. With great pleasure after my performances I hear people who came to listen to me once that they wish to attend my future concerts as well; and that also happened to the Regentenkamer. In my efforts towards the direction of bringing the mainstream audience closer to the classic guitar are also included some experimental cooperations I realize, for example with the eurhythmic dancers Gia van de Akker and Gail Langstroth. 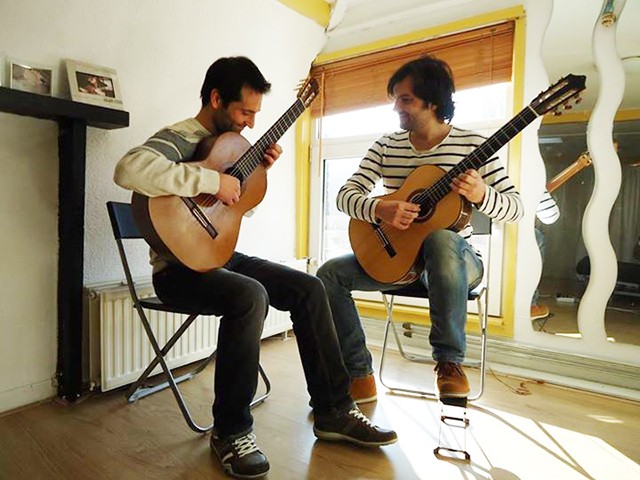 What else do you love apart from music?

I love volleyball and Ethnikos Alexandroupolis, since I was also a volleyball athlete from an early age, I do yoga regularly, I love AEK Athens FC and of course my home country, Greece.

What are your goals hereafter?

Currently there is a big ongoing project, a musical documentary of Greek (Single Films) and Spanish (Azhar Media) production, directed by Haris Donias under the aegis of the Hellenic Ministry of Foreign Affairs and its main topic is the classic guitar ((www.acousticmovie.com); the recording of my first personal album with Greek music for guitar; the proposal of the Dutch composer and guitarist Marco de Goeij to write for me a new composition for classical guitar and to realize the premiere in the Netherlands; discussions and proposals for performances in various European countries; the beginning of my collaboration with the Stemvork Institute, as well as the continuation of my educational activity so as to convey my art, my knowledge and my love for the guitar to more and more students.

Nikko Mavrid will be guest Dj in Friday Heroes Vol2, on the 24th of April in ClubLite together with Rogier

Martha is a very positive and happy person. She has lived in the Netherlands for quite a while and she…