Alexander is one of the first people I met when I first got in the Netherlands. He is a musician, visual artist, photographer, producer, friend and a great dad.

He has collaborated with almost all the Greek musicians that live in the Netherlands but also a plethora of artists from all music corners of the world.

With Amsterdam as his home base and experiences that many would envy, smiling and positive, he shares his music and stories with us.

If you are a musician that just got in the Netherlands, seek him out ;)

You are involved with a lot of things. But what characterize you? 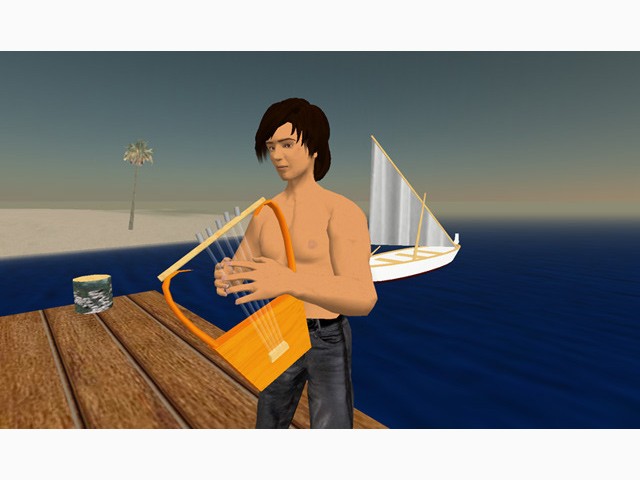 I have always been involved in media productions. In my life. I have periods of visual and ones of music creation, that makes me musician and media artist. I guess. During my latest visual phase for example, I realized many projects in Second Life, autonomous work, like animation, web-documentaries and ancient Greek instrument reconstructions, and applied, like the partial reconstruction of IJburg for a building corporation. The last eight years, my main activity and source of income is music. You might have come across me performing Greek, Balkan, Pop, Rock and Medieval music somewhere in the Netherlands.

From all these things that you have done, which one you love the most? 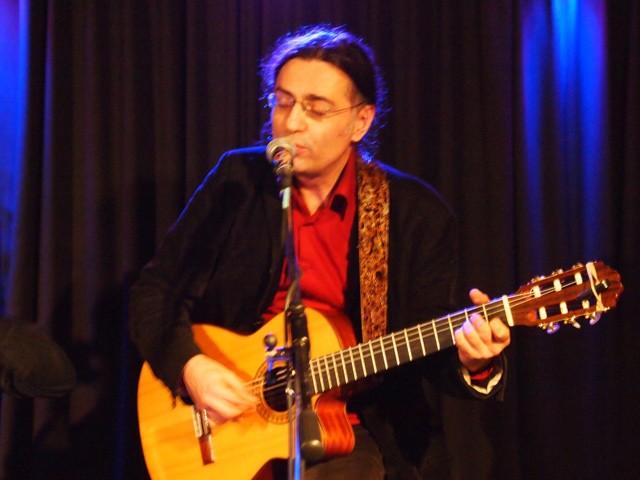 I love creation in any way. Overreacting to a small impulse, make something that does not exist yet. I love communicating with the world, be among people, give and take, reach people with what I do, inspire them and get inspired by them. I find myself very often busy with Love, as TV correspondent of KRO’s Memories but also as singer-songwriter. Another favorite subject is cultural interfacing between Greece and the Netherlands. I also love technology and pioneering.

How different is here in the Netherlands (people and government) since you moved here; 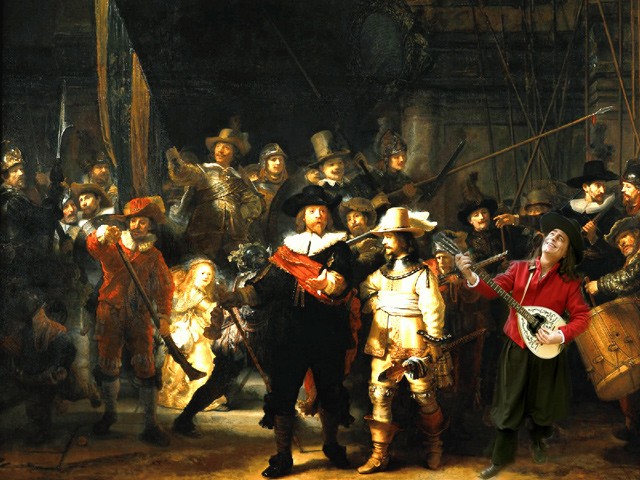 The Netherlands was for me a rationally choice as it seemed to be my perfect immigration country. During early short visits I fell in love with the country and its people. It was the end of the 80’s, the Netherlands were free, open, encouraging, social, liberal, soft, cooperative, happy, with a drive for contemporary art. Since 1998 the Dutch society is plagued by negative forces, even endangering milestones of their own civilization. But it still remains a very nice country to live in.

Medieval music with bouzouki. How bouzouki fits with these sounds; Tell us about the Slag ende Stoot. 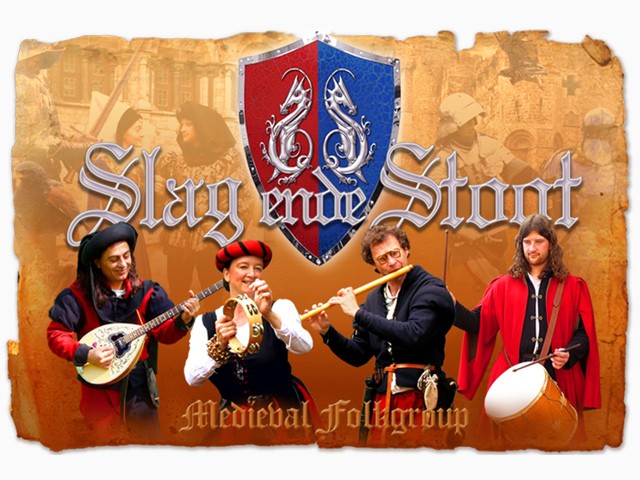 Medieval music is my latest important music project. It started about a year ago with an invitation of the Dutch medieval entertainment group ‘Slag ende Stoot’ to play bouzouki with them. At that time I had just bought a bouzouki but was not using it a lot. This was a great opportunity of musical development. Precondition was to immediately dive into a new kind of music and improve my skills rapidly. I liked medieval music from the beginning, I had found the origin of my beloved European ballad. A kind of rebetiko of contemporary pop music. Finally I could combine my affection of world music and Gothic rock in one band.

And all this with my long neck lute, a modified four-string Greek bouzouki. The tuning and thickness of the strings is been adjusted, to be able to get along with some of the old harmonies involved. On top of that I very often play chord progressions, so I need these fat base strings.

Slag ende Stoot was formed 15 years ago, have brought out two CD’s and are performing regularly in the Netherlands and abroad in medieval festivals and events. It is cool and inspiring to appear with them. At this very moment we are developing a theater project together with a group of actors. We even included some Greek medieval songs in our repertoire recently.

Which style do you like more in greek music, to play or listen at home? 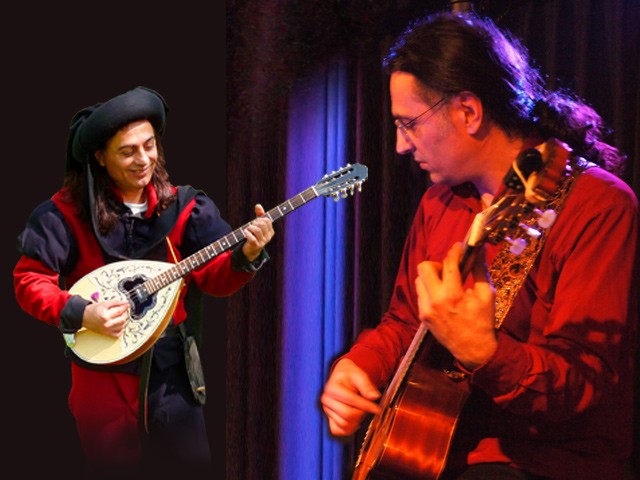 I listen to many kind of music at home, world, pop, classical. I love Greek endechno pop the most. During the 90ties I was not able to visit Greece due to personal complications. There was no world wide web then, so I missed the booming time for εντεχνο pop and I am now in the process of experiencing it by playing.

With which artists you have worked all these years; With which one of your musical friends, the collaboration was memorable? 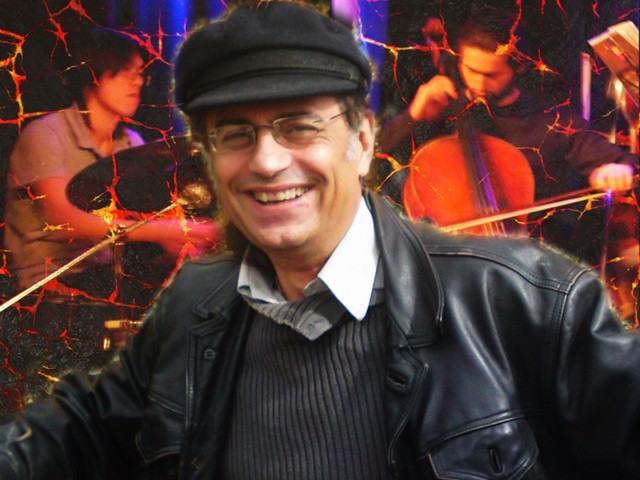 I have performed with the most musicians playing Greek music in Amsterdam. I always have short projects with artists of various genres, world, pop etc. I participate to Balkan formations since several years, nowadays in Balkan-band KALEB. Unforgetable are my performances at the Magneet festival with an extended Lamazi (Greek-Balkan band) and my performance at the Sugar Factory with Kapses (Greek rock). My most inspiring musical encounters were with Florian Micuta (keys) and Joseph Wharten (base).

How difficult is the life of a musician in the Nenterlands? 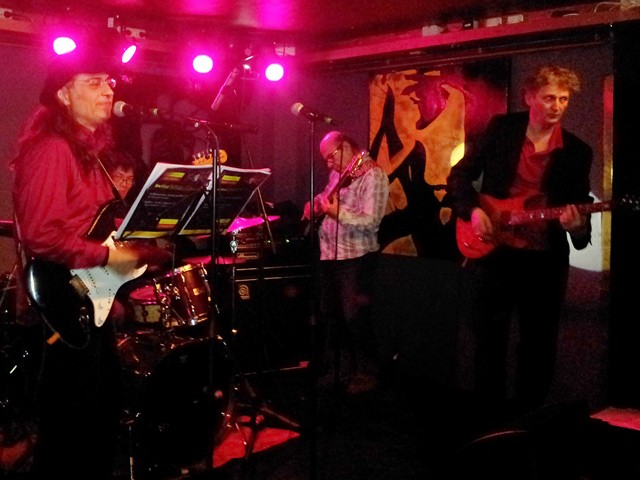 In the Netherlands music is less essential than in Greece, there is less music involved in the everyday life of an average person, especially in the areas above the rivers. In Amsterdam local musicians have to coexist with top artists from all around the world, as everybody wants to perform here. It is hard to survive merely from making music. Many great musicians have a regular job and make music as hobby. The bright side is that there are a lot of stages and festivals for gigs. The audiences are not hard to reach, but they are easily saturated and a bit spoiled due to the high quality competition.

How do you see the new wave of Greeks has come. What are they doing right and wrong;

New Greek immigrants are too optimistic and get thus easily disappointed. You must have a plan in advance, learning Dutch is not a detail. Immigration is different than vacation. Many Dutch that moved to Greece for good, have had similar experiences. The same happens to young Greeks massively moving to the Netherlands during the past two years. Patience and guts, that’s what you need.

Has the Dutch culture space for Greek accents;

During my first 15 years in the Netherlands I felt I had become Dutch. Since 1998 this process has been inversed, I keep rediscovering Greek aspects in me. It begun with my Dutch friends suddenly starting to find me rather Greek than Dutch. After the first shock I focused on discovering the positive sides of me been Greek living in the Netherlands. Since then I regularly jump in as mediator, a kind of cultural ambassador of Greece in the Netherlands and vice versa. As the mentality differs vastly, misunderstandings and irritation from both sides easily pop-up. I found my involvement in Dutch media productions in Greece on this point the most useful. 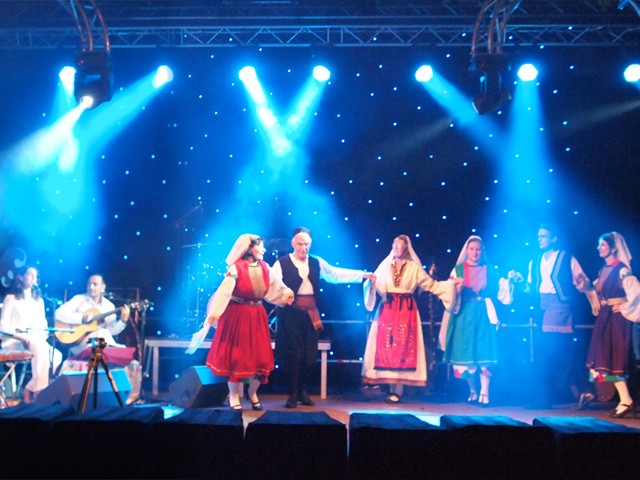 It was then that my love for Greek music prevailed. The very first day after my divorce I woke up, took my guitar and started playing songs of Hatzidakis. It was the very first time I played these songs, I did not even realize that I knew them. I did not stop doing since then. Nowadays I sing almost solely in Greek, if I like a song I translate it to Greek . Apart from a small group of insiders that I call Greekophiles, is Greek culture rather unknown in the Netherlands. During the past years I have initiated many projects crossovering Greek music to pop, Latin and Balkan. This was not always appreciated by the Dutch that love traditional music and rebetiko fans. I am happy to see that Greek music starts finding its own room on world music stages in the Netherlands.

What is your advice to an artist that wants to move to the Netherlands, chasing his dream?

Prepare yourself, talk to experienced people before you move, arrange music projects in advance, be patient but decided, try to come closer to others that already have found their way, don’t drop your price too much as life is more expensive here, don’t expect to find more gigs than in Greece there aren’t as many, try to find alternative source of incomes that will not drain your time and energy. Never forget your dreams but be pragmatic. Avoid wasting energy fighting fellow Greek immigrants. Take all opportunities that the universe brings you, enjoy your successes and do not complain al the time.

Where can we find you?

I play my lute-bouzouki in medieval festivals, churches and castles with Slag ende Stoot. I play guitar at ball-dance evenings with Kaleb. I sing and play Greek music in café’s galleries, parties and in Greek restaurants www.griekse-muziek.nl.

I’ve met a lot of interesting people through Iamgreek.nl. One of those people is Leo Peppas, a Greek…

There is no Greek who lives here in the Netherlands, that wouldn’t want the companionship of his best…