Martha is a very positive and happy person. She has lived in the Netherlands for quite a while and she really loves Amsterdam. Born an artist, she paints beautiful imagery with colors as vivid as her smile.

On the weekends you can find her at Maloe Melo, one of the most well known Blues Cafes of this city while her artwork decorates private collections all over Europe. She loves children and works with them on art programs and yet she keeps fillings us with new colors and work even though surviving as painter through ones art has become almost an unreachable dream. 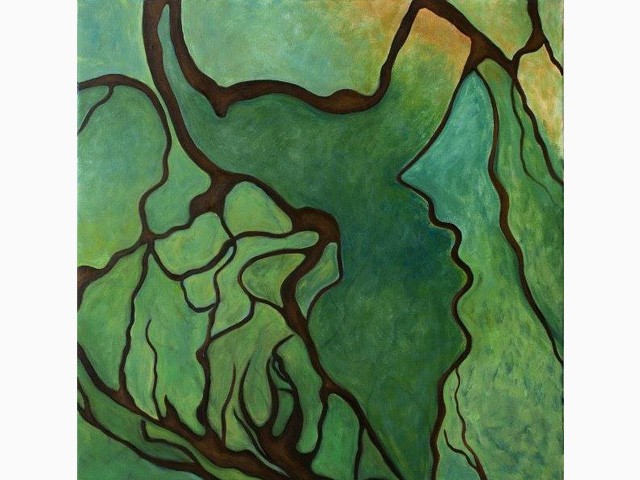 You are an artist, a painter and you have been living for some years in the Netherlands. Why did you choose to come here?

I graduated from the 5th Lyceum of Athens in 1982. From 1983 up to 1986 I studied at the School of Arts, Eleni Vakalo, in Athens. In the October of 1986 I visited Amsterdam where I came into contact with the Academy of fine arts, Rietveld Academie. The freedom of artistic expression and the contrasts with my purely strict academic knowledge - up to that point - impressed me.

I took a prep admission course at the Academy (1987-1988). I started my studies in 1989 at Rietveld and in 1994 I graduated as a graduate with specialization in painting and drawing. In 1996 I received a scholarship from the artistic foundation (Fonds voor Beeldende Kunst Vormgeving en Bouwkunst, Fonds BKVB) which was concluded with the Uitgelicht exhibition, RAI, in Amsterdam 1997.

In 1996 I returned to Athens where I stayed for 4 years. Thanks to scholarship I had the chance to rent a sunny studio so that I can work with ease. In 1998 I presented my work in a big solo exhibition at Aenaon gallery in Athens. From 2000 and up to now I have been living in Amsterdam taking part in exhibitions in the Netherlands and Athens and organizing educational art projects in schools. 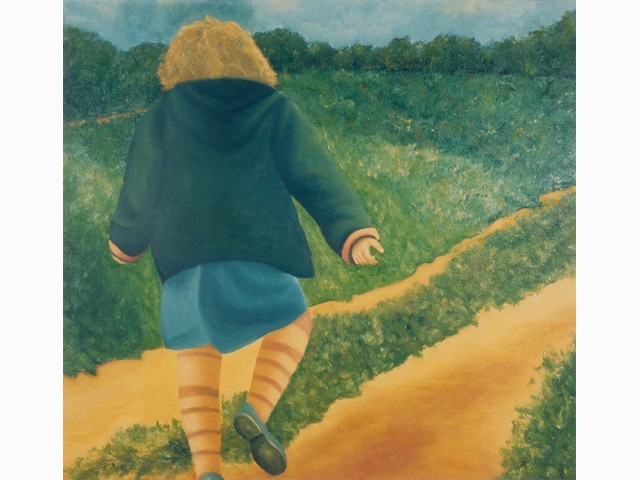 What do you like to create the most? You paintings are characterized by vivid colors and happy themes. What is your inspiration and where can we see more of your work?

The landscapes and the organic forms are my sources of inspiration. The light and the color. I first started with my subject being Landscapes-Memories (1993-1995, Dissertation subject) comparing unconsciously the Greek light with that one of the Netherlands as well as the Greek mountains (which took gigantic dimensions in my imagination) with the lack of any height difference in the Dutch nature.

The theme “landscape” continued throughout my stay in Athens (1996-2000). The paintings of that period have more vivid light and color. Color contrasts and volume. In those works we can see color like blue and light blue. It’s the colors that are shower with ample light. The volumes that are placed on those compositions are turned into statues. 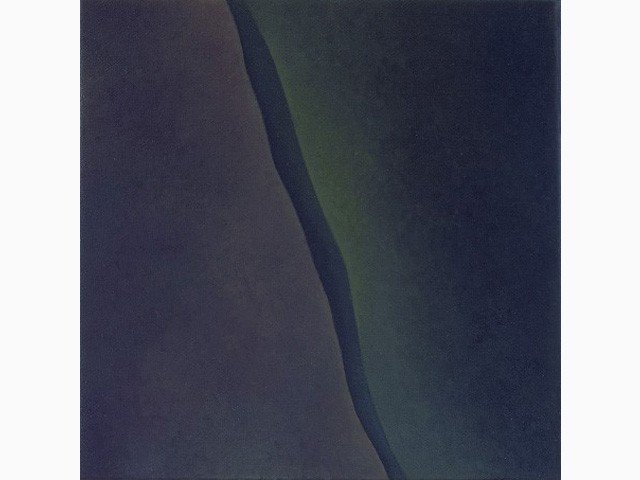 From 2000 I begin working more forms, without of course retiring the subject of “landscapes”. Organic forms. The Evolution series begins. From a scratch/cut of a rock slab begins a search within my forms, personal ones. That line turns into a round form that begins the series with the frog eyes. In this work I have an apparent need to zoom in on the form. Going closer to the object, isolating a part of it, resulting next to realize a new form. A parallel subject is the female body. Sections of the female body that are mutated into autonomous forms.

My studio is at Kraijenhoffstraat 34, in the center of Amsterdam. You can visit www.kraijenhoff.nl

My paintings are in private collections of France, Switzerland, Greece, Netherlands, Czech, at the CBK of Amsterdam and ID Gallery of Helmond. 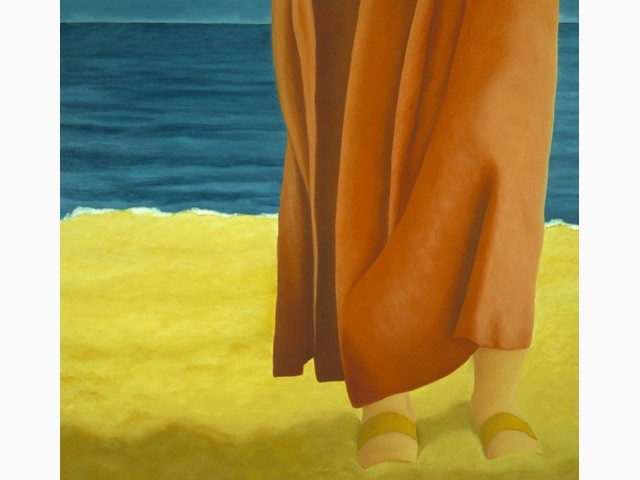 Are there noteworthy Greek artists in the Netherlands?

You can learn more here 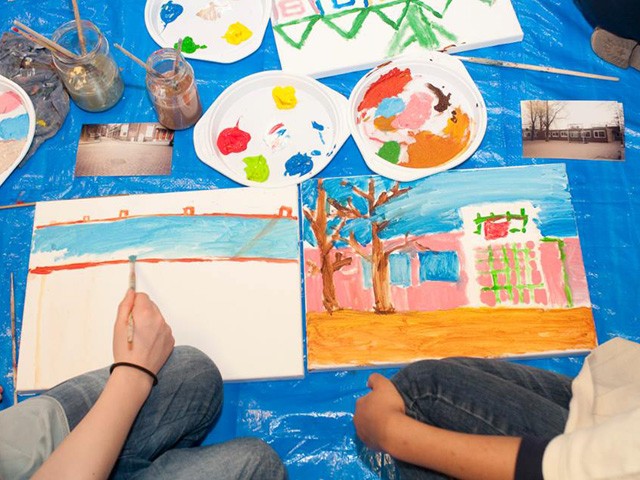 You love kids and you like working with them and doing workshops. Tell us a few things about that.

It’s my pleasure working with children, it gives me a lot of energy and inspiration. Their spontaneity, the freedom and straightness in color and in writing is amazing. It is not a coincidence that many well known artists gave a great chunk of their research into finding (again) the way to express like a child. (Picasso, Miro).

In 2002 I started teaching art classes for kids (Park de Meer, Amsterdam Oost) and at the same time I organized art projects (kunstprojecten) in schools. In 2010 I founded the nonprofit organization (stichting) “Art4elkaar” .

You can learn more at www.art4elkaar.nl 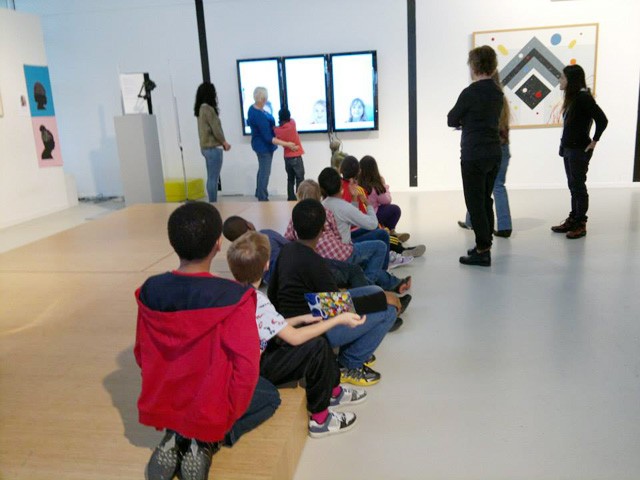 Up to now we have worked with more than 10 schools in Amsterdam with a total of 800 children. The educational artistic method that we have developed give the chance to children to get acclimated with different art forms (photography, painting, literature and music) and art institutions (art centers, exhibition spaces, ateliers).

We offer children the opportunity to develop their talents and learn to appreciate their neighborhood, art and culture. 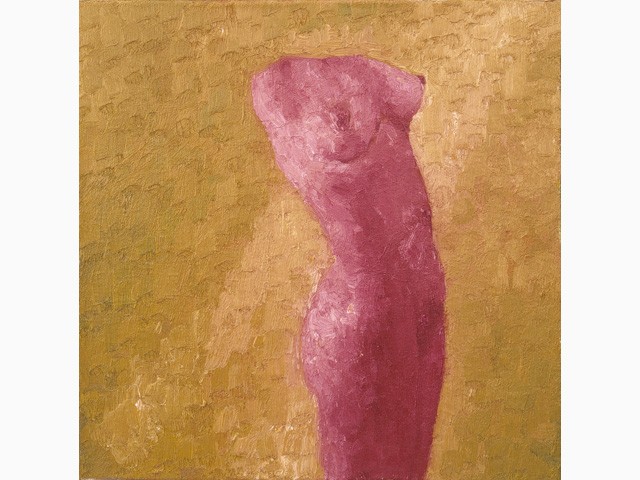 How much has the Netherlands changed from when you came here till now?

Generally everything changes and evolves, in some areas positively and in other negatively.

How energetic and creative must an artist be today in order to live through his art? Can art become work?

Because of the ongoing crisis an artist is now forced to find other means to insure financial assets. On the weekends I work at the Blues Cafe, Maloe Melo. That way I can dedicate the rest of the days in my Art. 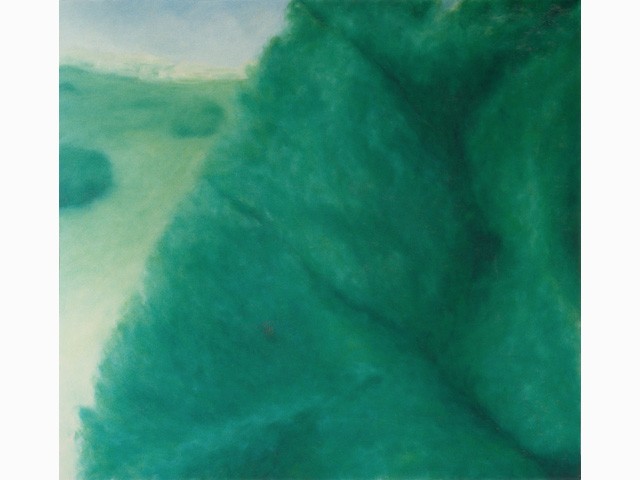 Has the fact that you are Greek in 2013 in the Netherlands, given you any trouble?

Because of the economic crisis in Greece it makes sense when you are introducing yourself as a Greek to Dutch people to have varied responses. If something make me feel bad is the fact of the inappropriate financial crisis in Greece - a country with a high and unique cultural history and the impact that it has on the people.

Living now for many years in Amsterdam I have distanced myself from the events in Greece. I know Greek culture and I have immersed myself in Dutch culture as well. I can recognize and appreciate the contrasts: different countries, different cultures. different mentalities, different habits. Each one unique and special.

As I mentioned earlier I believe that only through Art we can have a society of people without discriminations, where gender, race, origin and social status will no longer matter. 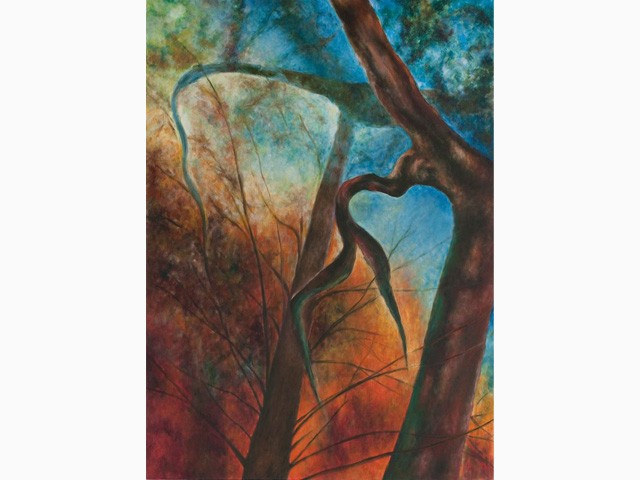 Those who know you, know that they can find you also at Maloe Maloe. How is the experience of working on one of the most well known Blues Cafes in Amsterdam?

Maloe Melo is the first blues music cafe in Amsterdam that features live blues music. It is a great atmosphere to meet friends and hear live music. It is the kind of place where you can meet people of any stature and age as well as a lot of noteworthy musicians too. 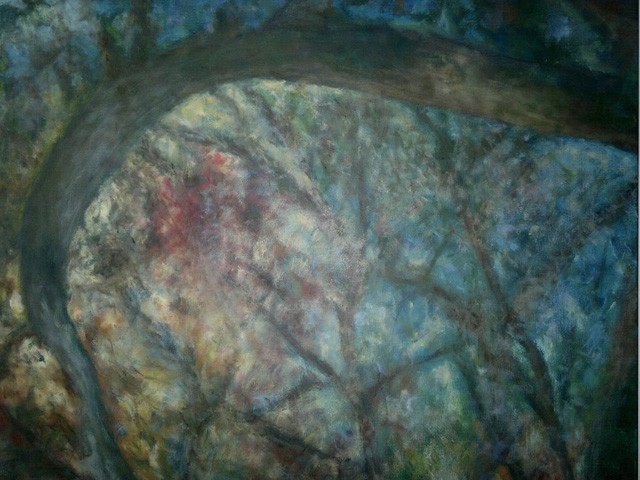 What work can we be expecting from you in the future?

Right now I am working on a new series “landscape”.

Alexandros is one of the first people I met when I first got in the Netherlands. He is a musician, visual…

I’ve met a lot of interesting people through Iamgreek.nl. One of those people is Leo Peppas, a Greek…